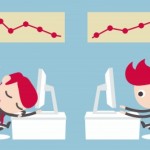 As a student of human behavior, I am often so very amazed at the vast number of people who think that success comes via dumb luck.

Consider this quote from the great Vince Lombardi.

?The dictionary is the only place that success comes before work. Work is the key to success, and hard work can help you accomplish anything.?
? Vince Lombardi

Vince Lombardi was one of the greatest NFL football coaches of all time, and some might say “THE greatest”.? Lombardi had such an impact on the NFL that the Super Bowl trophy is named in his honor. According to Wikipedia, Lombardi never had a losing season as a head coach in the NFL – a job he held for over a decade.

Lombardi played baseball and basketball in school, but never amounted to much in those areas due to the fact that he had poor eyesight and was, by most accounts, a sub par athlete.? Having tried and failed at several different types of work, he finally got his first coaching job, as assistant football coach at a Catholic High School in 1939, and finally, in 1954 – 15 years later – he started his career with the NFL, and went on to be the most successful NFL coach in history.

How did this man, who obviously was not born with a talent for athletics, become such a grand success in the NFL?? By living and working under the guidance of one very important truth:

You see, Vince Lombardi knew and understood that success is the product of attitude and hard work.?? It doesn’t come via the luck of the draw, and it doesn’t come by sitting on your behind watching TV 24/7 or by wandering willy-nilly through life, doing whatever it is that pleases you.

In the Midwest where we live, farms and crop fields abound.? Many of these fields here in my state are owned and/or managed by members of the Asian community, and every time I drive by one of these fields, I see a group of hard-working folk picking weeds – by hand – and tending to the care of their fields, which often consist of several acres of land.?? These hard-working families spend hours and hours each day, weeding the farmland and caring for the crops, day in and day out.? No machinery, just their hard working hands.?? And as a reward for their hard work, they have food to feed their families and to sell at local markets.

Having a semi-large garden, I can tell you that weeding by hand is an enormous amount of work.? Our family puts in about 1-2 hours a day, and then we’re spent.? Done.? Back to the TV we go.

But not these guys.? They’re not afraid of hard work, and they don’t sit around and whine about what they have to do – they just put on their sun hats and their long-sleeved, lightweight shirts, and they do what needs to be done.? Period.

They are successful because of their hard work.?

Do you have dreams, goals or things you want out of life?? Are you unhappy with the way things are?? Do you want more money?? Less debt?? The freedom to work where you want to work – or to not work at all?

If so, what are you doing to get there?? Do you have a plan in place?? Are you doing the hard work it’s going to take to achieve those goals, or are you trading in your dreams for the instant gratification of today’s fleeting and not nearly as satisfying short-term rewards?? Was that dinner out, that trip to the amusement park or the movies worth giving up your dreams?? Or do you want something better out of life?

Other than hard work, what have you found to being key to success in different areas of life? ?What do you do in order to not give into the temptation of throwing in the towel at times?