5 Simple Ways to Save Money While Eating Out 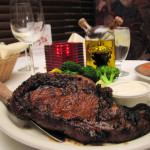 Going out to eat is one of my favorite guilty pleasures. Don?t get me wrong, I enjoy cooking, but sometimes it?s nice to let someone else prepare your meal after a long day at work.

I especially love eating out when I go with friends. The only problem with dining out is that it?s not very frugal. Here are five simple ways I save money, without harming the fun experience of eating out.

Most restaurants have a ?special? each day of the week. Some restaurants have the same rotating specials each week, while others have completely different ones depending on what the owner or manager feels like discounting.

The ?special? entr?e is usually $2-3 less than normal and it?s still a good-sized portion. Some restaurants don?t make the portion smaller for the special at all. If you’re trying to eat healthy on a budget, this can be a great way to save a little more money…especially when it’s a smaller portion. 🙂

Split a Meal or Ask for a To-Go Box

There are lots of restaurants in my hometown that serve HUGE food portions. Often times one of my friends and I will decide to split a meal between the two of us to save money?and so we don?t end up wasting a lot of food. Occasionally we?ll make the un-frugal decision to split a dessert too. This is a good treat, but we don?t do it very often.

If my friend and I can?t agree on a meal to split, I usually ask for a to-go box so I can take the leftovers home for later. The biggest mistake I make when asking for a to-go box is leaving the box on the table when I leave the restaurant. 🙁

Skip the Drink While Eating Out

Part of the fun of eating out with my friends is enjoying an alcoholic beverage now and then, but we don?t always get one. Alcohol and other drinks can add a lot of money on to your bill very quickly.

For instance, when I split a meal with my friend at our favorite Mexican restaurant, over half of my bill ends up being my margarita! On the nights that we don?t order a drink, I?ll just order water instead of a soda. Water is healthier and cheaper than pop anyway.

Most of the time my friends I do end up dining out for dinner rather than lunch because of our work schedules. But when we get together on the weekends, we try to dine out for lunch instead of dinner.

Lunch portions are typically smaller, so we don?t split meals, but lunch is also usually cheaper than dinner.

Order From the Kid?s Menu

This is a trick I tried out just the other day. We went to a diner to have breakfast for supper and I was really wanting pancakes. The only problem was that all the meals seemed huge. Then I saw the kids menu on the back page. For a kid?s meal with two pancakes, two pieces of bacon, and an egg is was $3.50.

I knew this was a much better portion size, plus that?s all the food I wanted anyway. Despite the menu saying the kid?s menu is only for kids under ten, the waitress let me order off of it anyway. It never hurts to ask! In the end I wasn?t able to finish quite all of my food anyway.

What are some ways you save money while eating out? How often do you go out to eat? Do you think restaurant portions are generally way too big?