Do You Make More Than a Stripper? 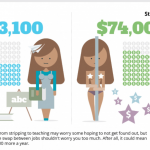 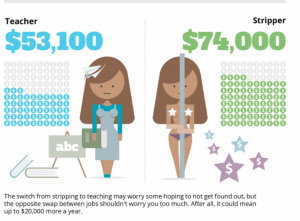 Catchy title, huh?! 😉 No, we’re not talking about stripping today here on?Wise Dollar?as we’re a family-friendly site,?but while everyone is busy recovering from the holiday weekend, I thought I’d lighten it up a little today and share this interesting little infographic I found over at Visual.ly. I’ve always been intrigued by how people end up on the career paths that they do.

I’ve written about that before over at Frugal Rules as I think it’s interesting to hear readers’ back stories to see what they’ve done in the past. Going with the same theme, it is always interesting to see how or why some professions pay the salaries they do. For example, my youngest brother just finished his first full year as a high school teacher in May. He was relatively happy with the salary he got, especially in relation to where he lives. But, when you look at what he makes on a per hour basis it’s a bit on the ridiculous side.

The politics of salaries aside I found this infographic interesting as it compares what people earn in various?professions. Admittedly, some of the comparisons are a bit over the top like a teacher vs. a stripper or Creative Director vs. a Submarine Cook but I think it’s interesting to see the comparison. I don’t know what numbers exactly they’re using to claim such salaries, though I did read that strippers in North Dakota have made as much as $2,000 per night,?as of a couple of years ago. That said, I think it goes without saying that it doesn’t really matter what your salary is, it’s how you manage it that counts. Making more money is better, of course, but I’d much rather be a teacher who is seriously saving money and investing it for a rainy day?as opposed to a hot dog vendor who lives the YOLO lifestyle without a second thought about his future.

by borisbenko. Explore more visuals like this one on the web’s largest information design community – Visually.

What salary surprised you most out of the ones shown? What was your first job? Do you make more than a stripper? 😉