3 Ways to Dispose of Your Clutter 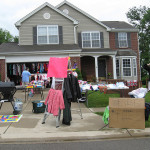 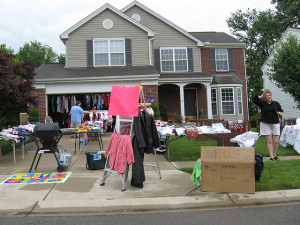 Along with trying to get out of debt, I?m also trying to dispose of?clutter in my life and in my house. I really believe clutter and debt go hand in hand, after all both can be caused by excessive shopping for things you don?t really need. I?ve been on my journey to get rid of clutter and debt for just over a year now and in that time, I?ve tried a few different ways to get rid of my clutter with varying degrees of success. Here are three ways I?ve successfully?freed up some space in my house.

Putting things in the trash is the easiest way to get rid of them – plain and simple. It takes almost no effort to open the trashcan or dumpster and put things inside it. But I hate trashing things that could be of value to someone else, so I rarely trash my clutter unless it?s something broken, used up, or actually just trash.

I have an almost permanent spot in my house where the ?donate box? lives. As I identify clutter that I want to dispose of that isn?t worthy of being sold online but isn?t trash, I put it in my donate box. Then once the box is full, I put it in my trunk and take to it to the second hand store the next time I?m out and about. Donating your clutter is one of the easiest ways to get rid of it, but many people have trouble donating things they spent a pretty penny on.

There are several ways you can sell your clutter, including having a garage or yard sale and posting things online.

Having a garage or yard sale to get rid of clutter is actually a lot of work. You have to designate an area to collect your sale items, sort them, price them, haul them to the yard or garage, organize them, etc. I have had several garage sales in the past with varying success. The last one I had made just over $600, so I will definitely be having another one in the future even though I don?t really enjoy them at all.

Selling things online can also be a hassle. If you go the Ebay route, it?s really only worth the time invested to sell pricier items. It takes quite a bit of research and time to sell things on Ebay and make any kind of ?profit? back.

If you decide to sell your clutter via Craigslist or your local Facebook Buy/Sell/Trade group, be prepared to be annoyed. My area is too rural for Craigslist to work well for me, but I?ve heard good things about it from friends who live in more urban areas. I?ve actually had a lot of success with selling things on Facebook. But with selling on Facebook comes the hassle of trying to set up meeting times with prospective buyers and hoping they show up on time. I?m pretty busy, so for me this is the biggest hassle and turn-off for trying to sell my clutter on Facebook.

As I get rid of more and more clutter from my home, I?m hoping I won?t have to continue pursuing all these different avenues to get rid of it. For now though, I?m just glad there are several options available. 🙂

How do you dispose of your clutter? What’s one thing you always seem to collect but never really seem to use. What tricks do you have to sell your stuff that doesn’t take a whole lot of time. Do you think debt?and clutter go hand in hand?